Last October, Radiohead shook up the music industry by allowing potential buyers to download their newest “In Rainbows” album for free.

This time Trent Reznor from Nine Inch Nails is even taking it further with their new album, “The Slip”. After you provide your email address, they give you the opportunity to send the invitation to up to three friends via email. 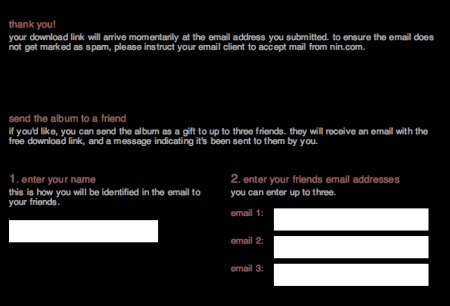 I wound up getting two emails before 9:00am from friends who filled out these forms.

This isn’t too much more than what Radiohead has done, but here’s a nice social media suggestion made by Nine Inch Nails.

Here’s another one, right on the nin.com home page. 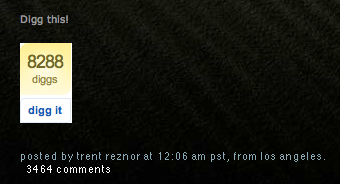 That’s quite a few Diggs.

Throw in a little user-generated media with their new single, more of a picture with audio, but that’s fine.

…and you have some great social media marketing coverage.

In slightly different news, it’s rumored that both Nine Inch Nails and Radiohead are are on headlining this year’s Lollapolooza, which is very strange since both Radiohead and NIN are known for dissing these types of events.

This entry was posted on Tuesday, May 6th, 2008 at 7:40 pm and is filed under Social Media, User-Generated Media, Viral Marketing. You can follow any responses to this entry through the RSS 2.0 feed. You can leave a response, or trackback from your own site.